This article discusses one of the three fundamental innovations or “breakthroughs” brought about by Teal organizations. 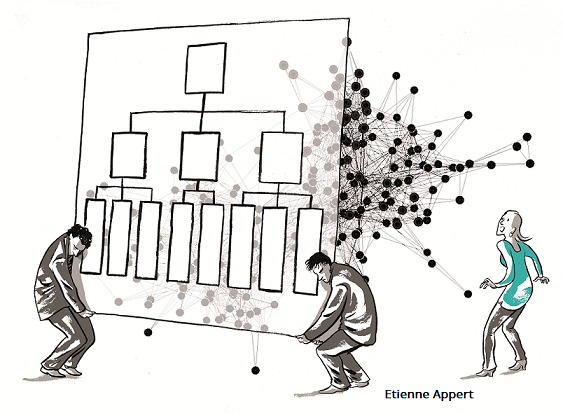 Leading scientists believe that the principal science of the next century will be the study of complex, autocatalytic, self-organizing, non-linear, and adaptive systems. This is usually referred to as “complexity” or “chaos theory” (the Teal equivalent to Orange’s Newtonian science). But even though we are only now starting to get our heads around it, self-management is not a startling new invention by any means. It is the way life has operated in the world for billions of years, bringing forth creatures and ecosystems so magnificent and complex we can hardly comprehend them. Self-organization is the life force of the world, thriving on the edge of chaos with just enough order to funnel its energy, but not so much as to slow down adaptation and learning.[1]

All stages of organizations prior to Teal have relied on a hierarchical power structure, with certain people exerting authority over others. The concentration of power and decision-making at the top, separating colleagues into the powerful and the powerless, brings with it problems that have plagued organizations for as long as we can remember. Power in organizations is seen as a scarce commodity worth fighting for. This situation invariably brings out the shadowy side of human nature: personal ambition, politics, mistrust, fear, and greed. At the bottom of organizations, it often evokes the twin brothers of powerlessness: resignation and resentment. The widespread lack of motivation we witness in many organizations is a devastating side effect of the unequal distribution of power. For a few lucky people, work is a place of joyful self-expression, a place of camaraderie with colleagues in pursuit of a meaningful purpose. For far too many, it is simply drudgery, a few hours of life “rented out” every day in exchange for a paycheck. The story of the global workforce is a sad tale of wasted talent and energy.[2] [3] [4]

Earlier stage organizations are seemingly built on the assumption that people cannot be trusted to act in the organization’s best interest without supervision. Teal Organizations are built on a foundation of mutual trust. Workers and employees are seen as reasonable people that want to do good work and can be trusted to do the right thing. With that premise, very few rules and control mechanisms are needed. And employees are energized to make extraordinary things happen.

Self-management in Teal comes about through a combination of innovative structures and processes. These are described in detail throughout the wiki, but a few are highlighted below:

The most common structure of Teal organizations are interdependent networks of small, autonomous teams. The nature of these networks will take a variety of forms, depending on the characteristics of their industry and environment, but all consist primarily of teams, usually 10-20 people, that self-organize and are not under the authority of anyone outside the team.

No bosses or organization chart

There are no fixed hierarchies of authority in Teal organizations. There are no bosses within or outside of the teams. The primacy of the boss-subordinate relationship is replaced with peer-based mutual commitments. Decision rights and power flow to any individual who has the expertise, interest, or willingness to step in and contribute to a situation. Fluid, natural hierarchies replace the fixed power hierarchies of the traditional pyramid - leaving the organization without an organizational chart. See also Organizational Structure.

No job descriptions or job titles

There are typically no job descriptions or job titles in Teal organizations. Rather each individual has a number of roles that he/she has agreed to and committed to fulfill. When someone senses an issue or an opportunity that calls for a new role, someone simply steps forward and offers to take on that role. See also Job Titles and Job Descriptions and Role Definition and Allocation.

Decision-making is highly distributed. Decisions do not need to be validated by the hierarchy nor by consensus of the community. Any person can make any decision after seeking advice from 1) everyone who will be meaningfully affected, and 2) people with expertise in the matter. See also Decision Making.

Everybody is given access to all information at the same time. See also Information Flow.

A 2009 Ernst & Young study found that Buurtzorg (see “Concrete examples for inspiration” below) requires, on average, close to 40 percent fewer hours of care per client than other nursing organizations— which is ironic when you consider that nurses in Buurtzorg take time for coffee and talk with the patients, their families, and neighbors, while other nursing organizations have come to time “products” in minutes. Patients stay in care only half as long,heal faster, and become more autonomous. A third of emergency hospital admissions are avoided, and when a patient does need to be admitted to the hospital, the average stay is shorter. The savings for the Dutch social security system are considerable— Ernst & Young estimates that close to € 2 billion would be saved in the Netherlands every year if all home care organizations achieved Buurtzorg’s results. Scaled to the US population, this savings would be equivalent to roughly $ 49 billion[5]

In the case of FAVI (see “Concrete examples for inspiration” below), a foundry based in France, all its competitors have moved to China to enjoy cheaper labor costs. And yet FAVI is not only the one producer left standing in Europe; it also commands a 50 percent market share for its gearbox forks. Its product quality is legendary, and its on-time delivery close to mythical: workers are proud of their record of not a single order delivered late in over 25 years. FAVI delivers high profit margins, year in and year out, despite Chinese competition, salaries well above average, and highly cyclical demand patterns.[6]

Pluralistic-Green organizations seek to deal with the problem of power inequality through empowerment, pushing decisions down the pyramid, and they often achieve much higher employee engagement. But empowerment within the traditional hierarchy means that someone at the top must be wise or noble enough to give away some of his power, and those below are subject to that power being reclaimed.[7]

In Teal Organizations: the point is not to make everyone equal; it is to allow all employees to grow into the strongest, healthiest version of themselves. Gone is the dominator hierarchy (the structure where bosses hold power over their subordinates). And precisely for that reason, lots of natural, evolving, overlapping hierarchies can emerge— hierarchies of development, skill, talent, expertise, and recognition, for example. This is a point that management author Gary Hamel noted about Morning Star:[8]

Morning Star is a collection of naturally dynamic hierarchies. There isn’t one formal hierarchy; there are many informal ones. On any issue some colleagues will have a bigger say than others will, depending on their expertise and willingness to help. These are hierarchies of influence, not position, and they’re built from the bottom up. At Morning Star one accumulates authority by demonstrating expertise, helping peers, and adding value. Stop doing those things, and your influence wanes— as will your pay.[9]

This particle article from targetteal.com, republished by Enlivening Edge Magazine is going thru the following topics in 2 parts:

https://thejourney.reinventingorganizations.com/videos.html#4 contains a rich set of 10-20 minutes videos that cover the following kind of topics: