Green organizations reflect the Green stage of consciousness[1], which strives for harmony, tolerance and equality. While retaining a pyramidal structure, Green organizations focus on empowerment to lift motivation and to create great workplaces. They go beyond the shareholder focus of Orange to embrace all stakeholders. Family is the dominant metaphor. 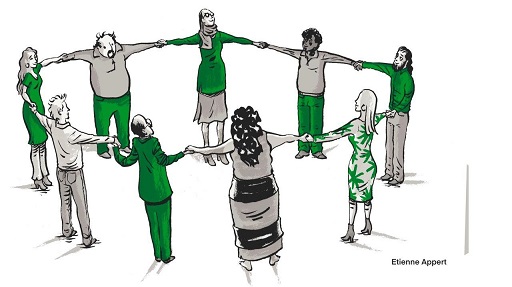 Green is aware of Orange’s shadow: materialism, social inequality, and the loss of community. Green is sensitive to people’s feelings: all perspectives deserve respect. It seeks community, cooperation, and consensus. Individuals strive to belong—to foster harmonious bonds with everyone.

In industrialized countries, in the late 18th and 19th centuries, a small circle operating from Green championed the abolition of slavery, women’s liberation and democracy. Ken Wilber puts it this way:

With the shift to reason and worldcentric morality, we see the rise of the modern liberation movements…what is fair and right and just for all humans, regardless of race, sex, or creed.

…In a mere hundred-year period..,from 1788 to 1888, slavery was outlawed…from every rational-industrial society. In (earlier paradigms) slavery is perfectly acceptable, because equal dignity and worth are not extended to all humans, but merely to those of your tribe.

For almost identical reasons, we would see the rise of feminism and the women’s movement on a culture-wide scale…Democracy, too, was radically novel… Let us remember that in the Greek “democracies,” one out of three people were slaves, and women and children virtually so.[2]

So, In the late 18th and 19th centuries, a small elite profoundly shaped Western thinking. In the 20th century, the numbers grew. While Orange is predominant today in business and politics, Green is very present in academic thinking, nonprofits, social work and community activity.

From this perspective, relationships are valued above outcomes. Rather than make decisions from top-down, Green favours collaborative, bottom-up processes, and trying to bring opposing points of view to consensus. Orange glorifies decisiveness. Green requires leaders to be in service of those they lead. This stance is noble, generous, and empathic. In light of continuing inequality and discrimination, there must be more to life than the self-centered pursuit of career and success.

Yet this stage has its contradictions. It tries to treat all perspectives equally and gets stuck when others abuse its tolerance to intolerant ideas. Red egocentricity, Amber certainty, and Orange see this as Green idealism. Green’s relationship to rules is ambiguous: on the one hand, rules are arbitrary and unfair, but doing away with them proves impractical. Green is powerful as a paradigm for breaking down old structures, but often less effective at formulating practical alternatives.

Breakthroughs and characteristics of Green organizations

Green is uneasy with power and hierarchy. If it means that those at the top rule over those at the bottom, then let’s abolish hierarchy. Let’s give everybody the same power. Let workers own the company in equal shares and make decisions by consensus.

Some have tried to create a future along these lines; like the cooperative movement in the late 19th and early 20th centuries; or in the communes in the 1960s. In hindsight, these extreme forms of egalitarianism proved not to be successful, on scale and over time.[3] Gaining consensus in large groups is inherently difficult.

Yet Green has come up with its own organizational model, via three breakthroughs. Some of the most celebrated and successful companies of recent times―Starbucks, Southwest Airlines, Ben & Jerry’s, The Container Store, to name a few—run on Green practices and culture.

Green Organizations retain the meritocratic hierarchical structure of Orange, but push as many decisions as possible down to frontline workers. They can make far-reaching decisions without management approval.

They are directly in touch with the many, smaller, day-to-day problems. They are trusted to devise better solutions than experts from far away. Ground teams at Southwest Airlines, for example, are empowered to seek creative solutions to passenger problems: their colleagues at most other airlines must follow the rule book.

Making decentralization and empowerment work on a large scale is not easy. Managers are effectively asked to share power and control. To make it work, companies must clearly spell out the kind of leadership that they expect from senior and middle managers. Green leaders should not merely be dispassionate problem solvers (like in Orange); they should be servant leaders. They should listen to subordinates, empower them, motivate them, and develop them. Time and effort is invested in developing servant leaders:

A strong, shared culture is the glue that keeps empowered organizations from falling apart. Frontline employees are trusted to make decisions, guided by shared values rather than by a thick book of policies.

Some people become disillusioned with this, and scoff at the notion of shared values. This is because Orange Organizations increasingly feel obliged to follow the fad: they define a set of values, post them on walls and on-line, and then ignore them if that is more convenient for the bottom line. But where leadership genuinely plays by shared values, you encounter incredibly vibrant cultures in which employees feel appreciated and empowered. Results are often spectacular. Research suggests values-driven organizations can outperform peers by wide margins.[4]

Green Organizations may put inspirational purpose at the heart of what they do. Southwest doesn’t consider itself merely in the transportation business; it insists it is in the business of “freedom,” helping customers to go to places they couldn’t without Southwest’s low fares. Ben & Jerry’s is not just about ice cream, it’s about the earth and the environment too.

In Orange Organizations, strategy and its execution are prime. In Green Organizations, culture is paramount. CEOs of Green Organizations claim that promoting culture and shared values is their primary task. This focus elevates human resources (HR) to a central role. The HR director is often an influential member of the senior team, and a counselor to the CEO. She heads a large staff orchestrating big investments into processes like training, culture initiatives, 360-degree feedback, succession planning and morale surveys.

Green Organizations insist that businesses have a responsibility not only to investors, but also to management, employees, customers, suppliers, local communities, society at large, and the environment. The role of leadership is to make the right trade-offs so that all stakeholders can thrive.

This is in contrast with the Orange perspective that for-profit companies should operate with a shareholder perspective and that management’s primary obligation is to maximize profits for investors. Adam Smith’s “invisible hand” is often invoked to explain how this benefits all stakeholders in the long run.

Social responsibility provides the motivation to innovate and to become better corporate citizens. They work with suppliers in developing countries to improve working conditions and prevent child labor; they reduce their carbon footprint and use of water; they may recycle products and reduce packaging.

Leaders in Green Organizations maintain that while the “stakeholder perspective” might mean higher costs in the short term, it will deliver benefits for all in the long run—including shareholders.

Family as the guiding metaphor

The dominant metaphor in Green is the family. This contrasts with the ‘organization as a machine’ in Achievement Orange. When leaders of Green Organizations speak, you can’t fail to notice how frequently the metaphor comes up: employees are part of the same family, in it together, ready to help each other out, being there for one another.

At Southwest, one of eight injunctions is to display “a servant’s heart”. In the Southwest Way it is for employees to “Embrace the SWA family.”

DaVita, a leading operator of dialysis centers, that has implemented Green principles with great consistency.[5]It uses another community metaphor, the Village, and calls its 41,000 employees citizens. Corporate headquarters is known as Casa DaVita, while Kent Thiry, the chairman and CEO is called Mayor of the Village. He is credited with having rescued the company from virtual bankruptcy in 1999 to its current success by virtue of the Green culture he brought about.

The Shadow of Green

Green is born from the movement away from Orange, in many ways specifically away from the shadow of Orange. At its peak, Green is communitarian, egalitarian and consensual.[6]

The accomplishments of Green are significant and can probably not be overstated. In the short time of it’s existence humanity has seen major change in the direction of a more humane society: the civil rights movement, the women’s liberation movement, the global drive for environmental protection, heightened awareness for the need to protect our ecosystems, health care reforms, improved awareness of marginalization of minority groups in society, and more are all examples of progress that would never have emerged without it.

But as much as Green is a healthy counterbalance to Orange, and to some extent also the previous stages, it is also a stage that can rigidify too far into its own spectrum and display its very own shadow tendencies.

Green is put in a dilemma when its benevolence and tolerance is abused by the same groups that Green wants to invite into equality on equal terms. Green shadow is forced to choose between accepting when non-tolerant Amber and Red abuses its tolerance or to acknowledge that not all worldviews have the same level of maturity and may need different levels of limitation.

In an effort to distance itself from Orange (rational) views, Green shadow sees all non-rational value systems as preferable. Green has a romantic notion with ‘back to nature’. It often does not see how pre-rational worldviews are deeply limited and how different they are from post-rational Green worldviews.

Accidental sameness as an externality of pluralistic identity

When Green’s strong inclusion drive becomes identity this causes a need for shared ideals as a prerequisite for group membership consideration.[7] When this “like me, like us” filter becomes more important to determine membership than if an individual is motivated and capable to contribute to the organization’s purpose this often causes three problems at the collective level: Limited choice of people, lack of diversity inside the organization and a limited ability to get things done.

Power and structure is the obstacle to equality

Green shadow confuses power with structure. Nature is full of both structure and natural hierarchy. In an effort to eradicate ineaquality Green shadow often attempts to dismantle all hiearchy and structure. But removing all formal structure from an organization does not defuse power, it forces power underground into informal structures. When members of these informal structures are not elected by members of the whole group the individuals who have power don't need to answer to the whole group or organization. This reduces transparency about use of power and disjoints power from accountability.[8] All groups create informal structures as a result of the interaction patterns among the members. Such informal structures can do very useful things. But only unstructured groups are totally governed by them. When informal elites are combined with a myth of ‘structurelessness’, there can be no attempt to put limits on the use of power. Consequences: a) people listen to others because they like them, not because they say significant things. b) informal structures have no obligation to be responsible to the group at large. Their power was not given to them; it cannot be taken away. Their influence is not based on what they do for the group; therefore they cannot be directly influenced by the group.”, see The Tyranny of Structurelessness, by Jo Freeman for more.]Power can’t simply be wished away. Like the Hydra, if you cut off its head, another will pop up somewhere else.