The topic of coordination covers the process of organizing work and exchanging knowledge across the organization. 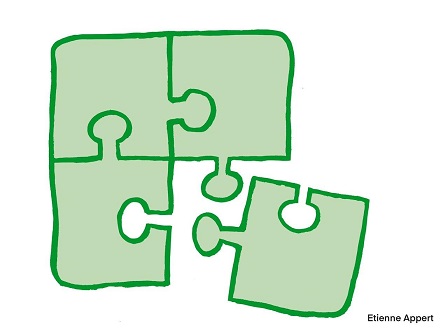 In Teal organisations, the need for coordination does not go away. However, the bosses, staff roles and endless meetings typically used to accomplish such coordination in earlier stages are replaced by more ad hoc and organic processes, including direct agreements and commitments between colleagues, ad hoc meetings, conversations on internal social networks, as well as people holding specific roles to support coordination. The advice process for making decisions is also fundamental to coordination in Teal.

In Red organisations coordination happens ad hoc and is intrinsically fused with power: coordination is generally limited to the boss’s ability to enforce it.

Orange organisations rely on continuous innovation and optimisation in order to compete. This means more need for coordination across units. The primary means of coordinating are meetings, a hierarchical decision-making structure and the creation of staff roles. Meetings, in particular, try to tap into the intelligence of the group. There are regular, fixed – often weekly – team meetings at every level of the organisation as well as numerous project and cross-functional meetings on specific initiatives.

In Green organisations coordination is often time consuming as the culture in these organisations tends to be more sensitive to people’s feelings. A lot of time is spent on bringing potentially opposing points of view to consensus. This egalitarian approach can lead to frustratingly long meetings and a lack of effective decision taking. As a result, colleagues sometimes feel the need to revert to power games behind the scenes to get things moving.

In a pyramid structure, meetings are needed at every level to gather, package, filter, and transmit information as it flows up and down the chain of command. In self-managing structures, the need for these meetings falls away almost entirely. Meeting overload in traditional organizations is particularly acute the higher you go up the hierarchy. The typical day of a top manager consists of back-to-back meetings. The joke goes that in most organizations, people low in the hierarchy work, while people higher up do meetings. In functional pyramidal structures, it could hardly be otherwise. The higher you go, the more lines converge. It is only at the very top that the different departments such as sales, marketing, R&D, production, HR, and finance meet. Decisions are naturally pushed up to the top, as it’s the only place where decisions and tradeoffs can be informed from the various angles involved. It’s almost deterministic: with a pyramidal shape, people at the top of organizations will complain about meeting overload, while people below feel disempowered.[1]

Teal organizations are not structured with fixed reporting lines that stack up to a pyramid, but often in small, autonomous teams. How then do colleagues coordinate actions across teams? What prevents the organization from disintegrating?

Teal Organizations deal with the need for coordination in a rather simple form-follows-function manner. When a problem or an opportunity arises, an ad hoc meeting is convened. When a more permanent form of coordination is needed, a specific role might be created. For instance, in a factory, teams could create a role for sharing best practice, for making joint-purchasing happen or for dealing with payroll administration. Such roles are created in a process of reverse delegation: the teams delegate coordinating tasks to someone outside the team. This person has no power to impose decisions or rules onto the team. When coordination is no longer needed, the role disappears. None of this needs approval from above. Things happen organically. Meetings and roles in self-managing structures emerge spontaneously; they exist as long as they add value to the ecosystem.[2]

The simplest form of coordination is simply one colleague speaking with another colleague – whatever their role and place in the organization. In the absence of hierarchical structures, no colleague is out of bounds. No superior needs to be informed when a colleague wants to reach out to another colleague.

Self-managing organizations tend not to have fixed, recurring meetings to coordinate across teams. Meetings are called in ad hoc fashion when someone feels that a need has arisen.

Information technology tools such as internal social networks and knowledge repositories can play a critical role in avoiding unnecessary structures and in steering knowledge exchange and coordination (especially when companies grow larger and people are spread throughout various locations).

When a more permanent and expansive form of coordination is needed, a specific role might be created to help ensure the coordination. For instance, in a factory, teams could create a role for sharing best practices, for making joint purchasing happen or for dealing with pay-roll administration. Such roles are created in a process of reverse delegation: the teams delegate coordinating tasks that make sense to happen outside the team, and the person filling the role has no power to impose the use of his or her services, decisions or rules onto the team. When coordination is no longer needed, the role naturally disappears.

Since coordination is largely organic and voluntary rather than imposed through hierarchy, these practices support the Teal breakthrough of self-management.

Similarly, since coordination under Teal is voluntary, any individual is free to promote coordination of efforts in a way that he or she sees fit and that meshes with his or her talents and interests.

The Teal approach to coordination allows an organization to function as a living system with its own sense for direction. Employees are coordinated as all their actions are guided by listening to the organization’s purpose. Trust in the collective intelligence of the system does away, in many cases, with the need for a master plan.

Fitzii’s weekly updates are essential to its communication. Weekly updates ensure every team member has regular access to a wide variety of information about the business – everything from financial performance to customer concerns and the personal engagement of the individual – resulting in increased alignment and engagement of Fitzii team members. Fitzii’s ownership and advisory board are also members of the Yammer group, and they occasionally add comments of encouragement or raise difficult questions within the weekly updates or at advisory board meetings.

In Holacracy's structure of nested circles, there are specific coordinating roles called “links". Sub-circles elect a representative, the “Rep Link”, for its overarching circle who sits on all that circle’s meetings. The overarching circle sends a representative of its own, the “Lead Link” to be part of the discussion in the sub-circle. Both roles come with specific accountabilities to ensure proper coordination across circle and sub-circle. See also “Role Definition and Allocation”/”Concrete examples for inspiration”/”Holacracy” and Holacracy's constitution.

HolacracyOne has set up a company-wide Role Marketplace in order to make trading roles easy. On the company’s intranet is a file where colleagues can “rate” every role they currently fill, using a scale of -3 to +3:

Using the same scale of -3 to +3, people can also signal their interest in roles currently filled by other people. The marketplace thus helps people wanting to offload or pick up roles.

At Morning Star, colleagues coordinate both ad hoc and through written annual agreements.

Colleagues at Morningstar noticed that lots of people were buying threadlocker (an adhesive that prevents nuts and bolts from accidentally loosening) in dozens of different formats and from different vendors. They were not only losing out on volume discounts, but the uncoordinated purchasing also generated unnecessary bureaucracy because regulations in the food industry required workers to track every format in a Material Safety Data Sheet. A worker suggested that he could walk around the plant once a quarter to coordinate orders. A similar solution emerged for purchasing packaging materials where volume discounts can quickly add up.[3]

Another key mechanism for coordination at Morningstar is the Colleague Letter of Understanding (or simply CLOU). See “Role Definition and Allocation" and then Concrete examples for inspiration”/”Morningstar”.

At Buurtzorg where 9000 nurses are scattered over the country, the internal social network ‘BuurtzorgWeb’ plays a critical role in knowledge sharing

At Buurtzorg, the company’s internal social network, “BuurtzorgWeb” plays a key role in the sharing of knowledge. When there is vast knowledge spread throughout the organization - the trick can be finding it. With BuurtzorgWeb, nurses can easily locate and contact a colleague with a specific expertise. Questions can be posted online in a continuous stream, similar to Facebook. Due to the high engagement level on the platform, each question is seen by thousands of colleagues in a few hours and attracts one or several responses.

In an example of how an initiative might scale in a Teal organization, a Buurtzorg team in the countryside recently developed a new concept - a boarding house for patients, to offer the patient’s primary caregiver a break. This concept was presented to all colleagues at a company retreat. Nobody at Buurtzorg made the call that this fit or did not fit Buurtzorg’s purpose or that resources should be allocated to scale the initiative. The concept will have to run its own course. If it is meant to scale, it will attract nurses in other teams to make it happen organically.

At FAVI, production is organized by customer. This makes load-balancing a significant issue: because customer orders fluctuate, on any given day some teams might have too much work and others too little. Rather than employing a COO or staff planner to make decisions about allocating work across teams, FAVI chose a more organic and elegant solution. At regular intervals, a group composed of one designated person from each team comes together for a few minutes; they quickly discuss which teams are over or understaffed; back in their teams, they ask for volunteers to switch teams for a shift or two. The person from the Audi team, for example, might ask who in the team is willing to spend the day with the Volvo team. Things happen organically on a voluntary basis; nobody is being allocated to a team by a higher authority.[4]