The Amber stage of consciousness[1] enabled humankind to develop organizations that could operate on an unprecedented scale. This led to the formation of bureaucracies institutions, and nation states, many of which have survived for centuries. Amber organizations strive for stability and are characterized by clear roles and ranks within a hierarchical structure. Leadership is exercised through command and control and compliance is expected throughout the organization . Stability and order are enforced through rules and processes. Innovation is not encouraged and competition is viewed with suspicion. The dominant metaphor is that of an army. Perhaps the most significant Amber organization is the Catholic Church. 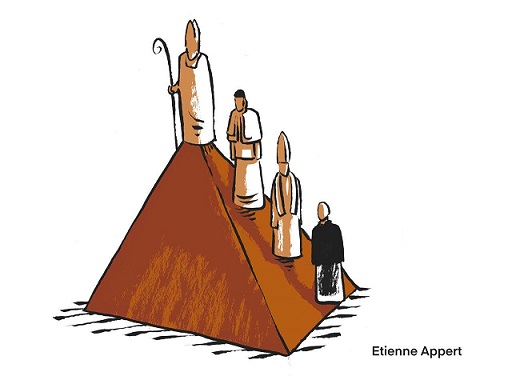 Every paradigm shift opens up unprecedented new capabilities and possibilities. When Amber consciousness emerged, humankind leaped from a tribal world subsisting on horticulture to the age of agriculture, states and civilizations, institutions, bureaucracies, and organized religions. According to developmental psychologists, a large share of today’s adult population in developed societies operates from this paradigm. At the Amber stage, reality is perceived through Newtonian eyes. Cause and effect are understood.

In Amber, people can grasp linear time (past, present, future) and project into the future. This is the soil from which agriculture could emerge: farming requires the self-discipline and foresight to keep seeds from this year’s harvest to provide for next year’s food. The calorific surplus generated by agriculture allowed for feeding a class of rulers, administrators, priests, warriors, and craftsmen; this brought about the shift from chiefdom to states and civilizations, starting around 4000 BC in Mesopotamia.

The dominant metaphor is that of an army.

Amber consciousness develops a deeper awareness of other people’s feelings and perceptions. Piaget, the pioneer child psychologist, has given us a defining experiment of Amber cognition. A two-colored ball is placed between a child and an adult, with the green side facing the child and the red side facing the adult. Prior to the Amber stage, a child cannot yet see the world from someone else’s perspective, and he will claim that both he and the adult see a green ball. At the age of around six or seven, a child raised in a nurturing environment will learn to see the world through someone else’s eyes and will correctly identify that the adult sees the red side of the ball.

Psychologically, the implications are enormous. I can identify with my perspective and my role and see it as different from yours. I can also imagine how others view me. My ego and sense of self-worth are now very much based on other people’s opinions. I will strive for approval, acceptance, and position in my social circle. People at this stage internalize group norms, and the thinking is dominated by whether one has the right appearance, behaviors, and thoughts to fit in. The dualistic thinking of Red is still present, but the individual “my way or your way” is replaced with a collective “us or them.” Red egocentrism has given way to Amber ethnocentrism. Ken Wilber puts it this way: Care and concern are expanded from me to the group―but no further! If you are a member of the group―a member of … my mythology, my ideology―then you are “saved” as well. But if you belong to a different culture, a different group, a different mythology, a different god, then you are damned.[2]

Self discipline and authority

In Amber, the formerly impulsive Red self is now able to exercise self-discipline and self-control, not only in public but also in private. Amber societies have simple morals based on one accepted, right way of doing things. The Amber worldview is static: there are immutable laws that make for a just world, where things are either right or wrong. Do what’s right and you will be rewarded, in this life or the next. Do or say the wrong things, and you will be punished or even rejected from the group―and possibly suffer in the hereafter. People internalize the rules and morality and feel guilt and shame when they go astray. Authority to define what is right and wrong is now linked to a role, rather than to a powerful personality (as was the case in Red); it’s the priest’s robe, whoever wears it, that defines authority.

Amber societies tend to be highly stratified, with social classes or caste systems and rigid gender differences as defining features. A lottery at birth defines what caste you are born into. From there, everything is mapped out for you―how you are to behave, think, dress, eat, and marry is in accordance with your caste.

With so much in flux in the world today, some find Amber certainties an appealing refuge and call for a return to a fixed set of moral values. To take that perspective is to ignore the massive inequality of traditional societies that set strict social and sexual norms. It can be unpleasant, to say the least, to be a woman, a homosexual, an untouchable, or a free thinker in an Amber society.

Breakthroughs and characteristics of Amber organizations

Red organizations tend to be opportunistic; they don’t generally think more than a few weeks ahead. Amber organizations can take on long-term projects―constructing cathedrals that might take two centuries to complete or creating networks of colonial trading posts thousands of miles away to facilitate commerce.

This breakthrough is very much linked to the invention of processes. With processes, we can replicate past experience into the future. Last year’s harvest will be our template for this year’s; next year’s classroom will be run with the same lesson plan as this year’s. With processes, critical knowledge no longer depends on a particular person; it is embedded in the organization and can be transmitted across generations. Any person can be replaced by another that takes over the same role in the process. Even the chief is replaceable, in an orderly succession, and Amber organizations can therefore survive for centuries.

At an individual level, people operating from a Amber paradigm strive for order and predictability; change is viewed with suspicion. The same holds true for Amber organizations, which are exceptionally well-suited for a stable world where the future can be planned based on past experience. They operate on the hidden assumption that there is one right way of doing things and that the world is (or should be) absolute. What has worked in the past will work in the future. Amber organizations find it hard to accept the need for change. The idea that there is one right way makes them uncomfortable with competition. Historically, they have striven for dominance and monopoly.

In Red organizations, power structures are in constant flux as personalities jockey for influence. Amber organizations bring stability to power, with formal titles, fixed hierarchies, and organization charts. The overall structure settles into a well defined hierarchy. The plant manager is in charge of the department heads, who in turn oversee unit managers, line managers, foremen, and operators. Personal allegiance to the chief is no longer needed because everyone knows where they fit in the hierarchy. Much larger organizations become possible, spanning not hundreds but thousands of workers, and they can operate across vast distances. Mankind’s first global organizations―from the Catholic Church to the East India Company―were built on a Amber template.

Planning and execution are strictly separated: the thinking happens at the top, the doing at the bottom. Decisions made at the top get handed down through successive layers of management. Control is maintained through compliance with rules and procedures. Leaders at all levels are given responsibility for compliance and can discipline those found wanting..

The underlying worldview is that workers are mostly lazy, dishonest, and in need of direction. They must be supervised and told what is expected of them. Participatory management seems foolish from an Amber perspective; management must rely on command and control to achieve results. Jobs at the frontlines are specific and often routine. Innovation, critical thinking, and self-expression are not asked for (and are often discouraged). Information is shared on an as-needed basis. People are effectively interchangeable resources.

From the vantage point of later stages, this might sound severely limiting. But as a step up from Red, it is major progress. Even people at the bottom of the organization feel that the predictability of routine work is liberating compared to the constant vigilance required in Red organization.. We no longer need to watch out for threats and danger that might come unexpectedly from any direction. We just need to follow the rules.

Size and stability become possible because people in Amber are content to stay in their place in return for safety and predictability. People operating from this stage closely identify with their role and position. Amber organizations have invented and generalized the use of titles, ranks, and uniforms to bolster role identification. A bishop’s robe signals that inside is no mere priest. A general’s uniform can hardly be confused with a lieutenant’s or a private’s, even from far away. In factories, the owner, the engineer, the accountant, the foreman, and the machine operator tend to dress differently, even to this day. When we put on our ‘uniform’, we also put on a distinct identity, a social mask. We internalize behaviors that are expected of people with our rank and in our line of work. As a worker, it’s not only that I wear a different clothes to the engineer. I eat in the workers’ mess; he eats in the factory restaurant. And in these places, the subjects of conversation, the jokes, and the type of self-disclosure are vastly different. Social stability comes at the price of wearing a mask, of learning to distance ourselves from our unique nature, from our personal desires, needs, and feelings; instead, we embrace a socially acceptable self.

Historically, this hierarchical stratification in organizations paralleled social stratification: The roles you could aspire to depended on your families position in society. It was often very difficult to ‘break the mold’. Fortunately, that rigid social stratification has disappeared in modern societies. Today’s Amber organizations still tend to reinforce hierarchy, albeit in more subtle ways. Promotion is often based on experience and service and sometimes the most qualified do not get the job because they haven’t ticked all the right boxes.

Amber shadow: Us versus them

Social belonging is paramount in the Amber paradigm. You are part of the group, or you are not―it is “us” versus “them.” This dividing line can be found throughout Amber organizations―nurses versus doctors versus administrators, line versus staff, frontline versus headquarters etc. Amber organizations have definitive silos, and groups eye each other with suspicion across them. Co-operation and trust is enabled through procedures and rules that people have to abide by.

If there are barriers inside the organization, there is a moat between the organization and the outside world. Amber organizations try wherever possible to be self-contained and autonomous. Early car factories had their own rubber plantations and steel mills, operated their own bakeries, and provided social housing. Employees also “belong” to the organization: employment is assumed to be lifelong, and much of people’s social life revolves around the organization. The possibility of dismissal therefore carries a double threat: employees risk losing both the identity the work gives them as well as the social fabric they are embedded in. Someone who decides to leave the organization is often met with bewilderment, if not accused of betrayal. Many of today’s Amber organizations still have lifetime employment as an underlying norm. For those who decide to leave, the process is often painful―akin to shedding an old life and having to reinvent a new one.